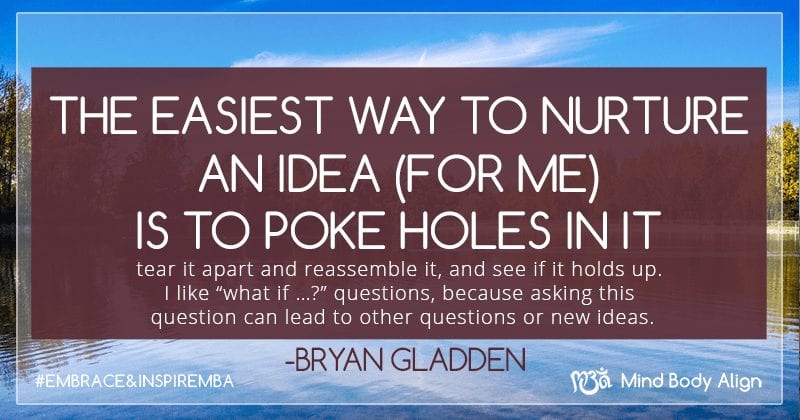 I am very honored and humbled to be your guest blogger and assigned, “embrace and inspire” as the topic. I was assigned this almost a year ago and I had many thoughts and ideas cross my mind. To me creative ideas and concepts are just as important to me as breathing. The idea needs to be embraced and inspired. Usually the original thought is good but it needs a sounding board, i.e. a litmus test. The idea needs wings to fly or to fail. Ideas need to be shared, with friends and with people you don’t associate with.

A good idea is… well, a good idea

It can be more when it is not just received by a small majority or only your group of friends. A good idea can be universal, and when it embraces you and won’t let go until you nurture it, care for it, raising it until it can stand on its own two feet.

The easiest way to nurture an idea (for me) is to poke holes in it, tear it apart and reassemble it, and see if it holds up. I like “what if …?” questions, because asking this question can lead to other questions or new ideas.

I wrote a play over twenty years ago, or so I thought

I wanted to write a romantic comedy, so I asked myself what Hollywood considered to be the stereotypical romantic setting, and came up with two lovers at sunset on the beach. I don’t know if it was serendipity or what, but as I was playing with this thought, The Incredible Mr. Limpet with Don Knots worked its way into my thoughts.

The first premise for the play was:

What if there are two lovers on the beach, and they think they are alone?

What if these humans are at the beach but they are not alone because there is fish in the sea.

What if these fish come to this beach to be entertained by the humans? Can actors play fish?

I wrote the first act draft like a man possessed, the muse flowed through my veins, the second act draft took ten years. So, from the first idea in 1998 the complete first draft wasn’t completed until 2008. This is probably a good place to point out I hate to edit. While the Fish play, which in 2008 or later, eventually titled Reflecting Pond, probably as a part of the editing process.

In the meantime, I co-wrote two other plays. I wrote one with my best friend, Mark Jordan, Comedy of Eros, about Shakespeare reincarnated, and The Great Equalizer, a play about restrooms and the differences of men and women. I started coaching high school soccer and then life took over and Reflecting Pond sat in the back of my mind, poking and prodding

I needed to embrace my muse and be inspired

Remember when I said I needed to share my ideas? I shared the first idea, and the first act with anyone who would read it, I needed to know the concept was good, I needed to be embraced and inspired; this was my baby. I needed to know it was not ugly or malformed. Two people, two playwrights, my good friend Mark Jordan and my Professor Ralph Hunt, both questioned my play, my baby, my life? They prodded at it, poked holes, questioned concepts, like overly critical uncles.

Professor Hunt just kept saying, “play around with it, see what you come up with.” Mark on several occasions corrected my spelling and grammar, most of which I ignored. They were supposed to love my play and just say “nice things.” Don’t be critical of my baby!

But they were right, I had not done the hard work and I had not asked myself the hard questions. Oh, sure I had found inspiration, my muse and I had a torrid love affair, late nights where she would come and visit me, whisper sweet nothings, leave me wanting and then just vanishing for days and months on end. She had left me with our child, our play, and it was my job to raise it. Me and two critical uncles, Three Men and A Baby!

After many years of not listening

I finally embraced what they were telling me. They had taken the time to listen to me and my concept, they had seen my baby, my play for what it was, a good start, an infant, that needed fed and nourished, so that one day it, Reflecting Pond could stand on its own.

When Professor Hunt said, “Play around with it and see what you come up with,” he was not trying to placate me, what he was saying was, “is there more? Can you take this further?” And Mark, God bless him, he never gave up. He continued to encourage me and inspire me and push me to be a good parent.

These two playwrights helped me put my play out into the world. They asked me, those, “what if” questions and my child would have been a bucked tooth baby had they not.

This past June, Reflecting Pond was accepted at the Columbus Arts Festival and at the Ohio State University at Mansfield. I got to direct my best friend Mark in the play, and on several occasions, cried.

To embrace and inspire

For me to embrace and find inspiration, I needed to be embraced and inspired myself. I think at times we view the artist somehow separate and not a part of the group. I know I need the group, for the group is where I find inspiration. I have worked in community and economic development for over eight years and artistic development for over thirty, there are many common elements. 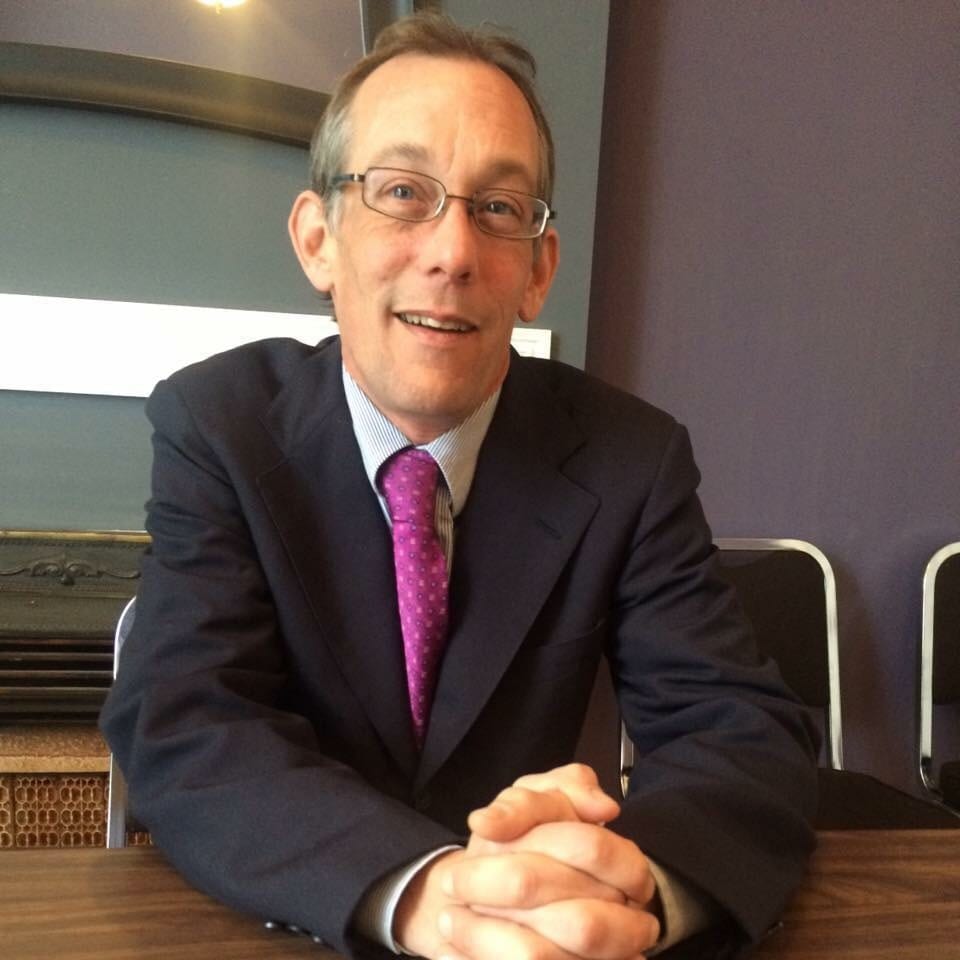 Bryan Gladden is a lifelong resident of Mansfield, Ohio. He is the Arts Community Liaison for The Richland Academy of the Arts. Besides work and writing, he is active part of the Richland county community, coaching soccer, acting, directing, serves on several boards. He is always willing to help and collaborate to make Mansfield a better place to live and work. 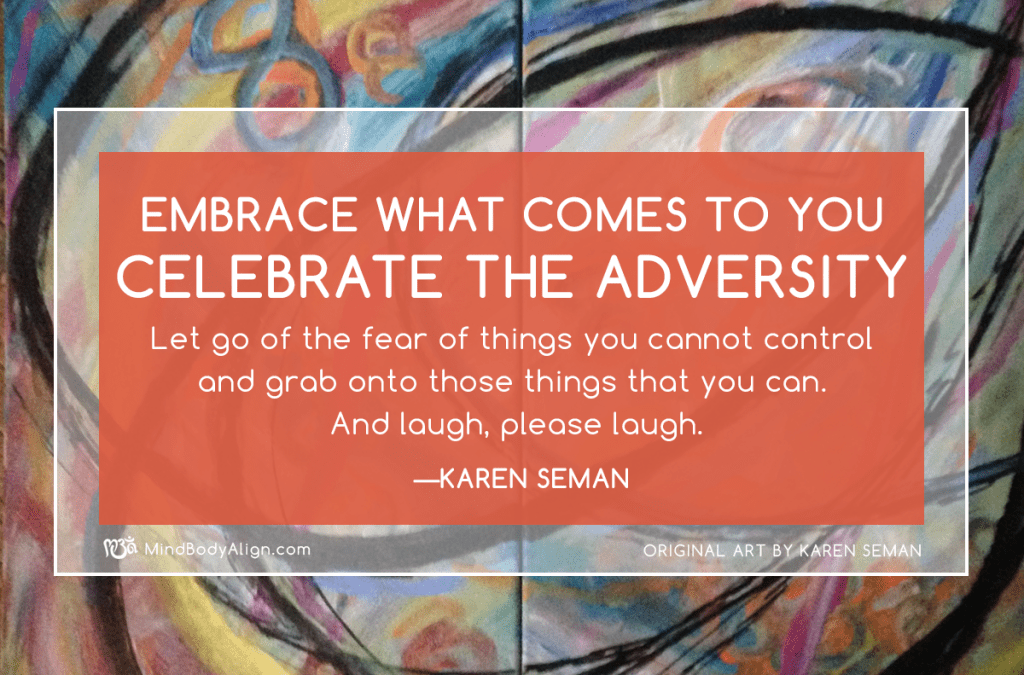 Diana H. asked, “Hey Karen can you share your thoughts on the terms embrace and inspire?” I said sure. It’s my hope that my brief, but spectacular, piece will inspire people to embrace the inevitable.

I’m the youngest of three girls born to working class parents, from a working class town. I paid my way through college, and graduated debt free. I’ve had interesting work related experiences. I’ve made decent money. I’ve had deep meaningful, intimate relationships with strong men, but have never married. I’ve lived past the half century mark in age, and… I’ve had cancer.

Oh… that scary word: cancer. Actually, that word has been a big part of my life.

My first dance with cancer came at age nineteen, as a sophomore in college. That encounter left me with a nine-inch vertical scar down my abdomen. My second encounter was with my father, who valiantly lived much longer than the professionals predicted. He passed away when I was twenty-six years old. And my third embrace came when I was diagnosed with life threatening, cervical cancer at age forty-four. From that I gained another scar, a seven-inch beauty running horizontally along my lower abdomen.

You may have missed what I wrote, “third embrace with cancer”

I use that term because I never ran from cancer, I embraced it. I never doubted that I wouldn’t live through my encounters. I lost more sleep over my father’s illness than my own.

Why?  I could control my own response to the crisis, I was rock-solid centered, and confident. I asked tough questions and armed myself with the knowledge of my choices in moving forward. I forced my doctors to treat me as a person, not simply as a patient.

And oh! Something else, because I come from a family who uses inappropriate humor to defuse stress, I laughed. I laughed a lot.

Embrace what comes to you, celebrate the adversity. Let go of the fear of things you cannot control and grab onto those things that you can. And laugh, please laugh.

I embrace that my bikini days are over, that I’ve gained thirty pounds since age forty. I embrace that lovers haven’t been turned off by my scars; my inner beauty is celebrated instead. I embrace that what is encountered in life does make you stronger, wiser and better.

It’s my hope that my message will inspire you to:

On the walls of my home are numerous art pieces, among my favorites say:

And the quote from Will Rogers, “Some people try to turn back their odometers. Not me, I want people to know “why” I look this way. I’ve traveled a long way and some of the roads weren’t paved.”

I have more, but you’ll have to be invited. They’re not printable here, remember – I have that humor thing. 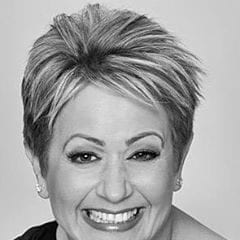 Karen Seman is native of Youngstown, Ohio. She has never been in the mob, but attended church with many who were. In the last few years, she’s taken up acrylic painting and one of her works hangs appropriately on the restroom wall at MBA. She lives in Woodland, in a home once rented by Paul Newman, with her fifteen-pound stunningly cute cat, Mattie. Unfortunately, neither Mattie nor Karen has ever seen Paul’s ghost. She’s been employed in economic and workforce development for years. She’s pretty handy, but will not work on car repair or household electrical work. One day she hopes to sell her artwork from a studio known as Three Mean Sisters.