Cherish the gifts of gratitude 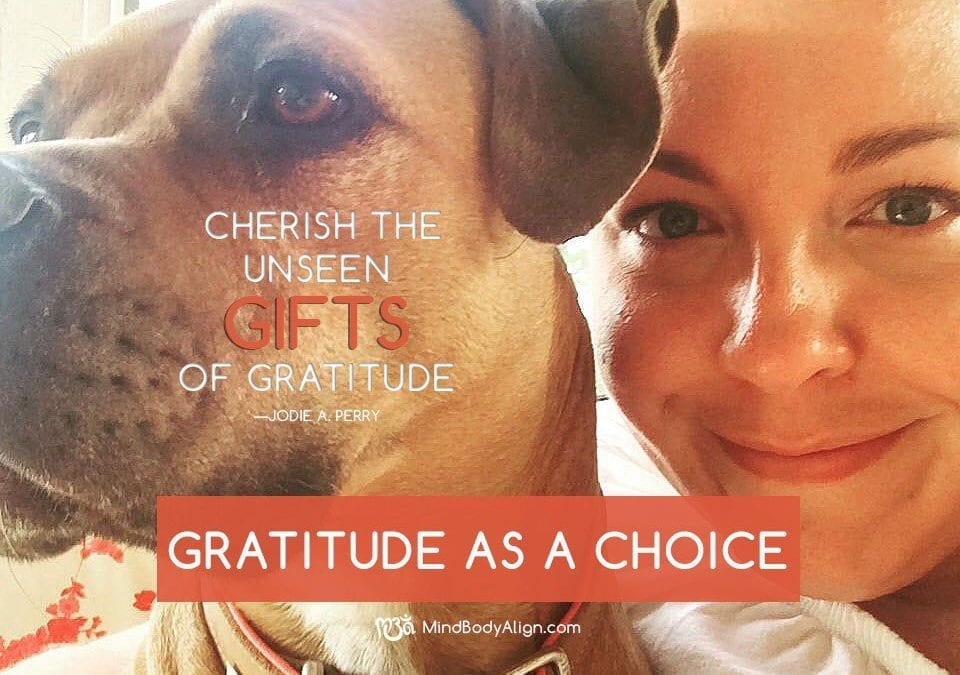 I pulled in the driveway late, the dog was waiting to be walked, my shoulders ached from sitting in front of the computer or in meetings all day, and I had just had a short, clipped conversation with a family member that had further darkened my mood. I trudged through the rest of the evening grumbling under my breath about the whole conversation and just how stressed out I was about life. Each day had ended similarly in the recent weeks and I just felt like there was no end in sight.

As I went to bed that night I thought, “There has to be more than this.” I wasn’t questioning life, I love God and feel comfortable with my faith. I was questioning how I was spending my time. I felt like my life was controlling me rather than the other way around.

It would make a neat story if I could tell you I solved it that night, but that’s not how things happened. However, not long after I had another revelation. We’re going to have far more ‘mundane’ days than ‘banner’ days.  How could I learn to be thankful for even the repetition of daily life?

I decided to start a thankfulness journal

At the end of each day I started writing 3 things I was thankful for that day. Three things soon grew into four or five. Were there tough days? Sure, some days I was thankful for big broad things (my dog, my health, my job) but some days ended up being incredibly specific (kind words someone had shared, a special treat, puppy snuggles).

Little did I know but the rest of 2016 was going to be filled with a lot of challenges and stress and my thankfulness journal kept me grounded in the midst of it all. I enjoyed rereading older pages and just remembering the little mundane things. It affected my mood, too. I can’t tell you I never got frustrated or mad, but I did see a decline in the amount of times that happened.

Even bigger, remember that family member I was grumbling about? Well things came to a head and we ended up talking through our issues. Of course, we both had things that we needed to change, and we did and the relationship has been great ever since. The funny thing is that I don’t think I would have been willing to change had I not reset my priorities to focus on gratitude. I wouldn’t have even gotten past my own ego. So I was thankful for that.

Cherish the unseen gifts of gratitude

A few months after that my beloved dog was diagnosed with terminal cancer. Knowing what lay ahead, I was so thankful that I had taken the time to be consciously appreciative of her and her love and affection throughout the year. It made our final months together special and I said goodbye knowing that I had shown her so much love.

Now, to be honest with you, I fell off the gratitude wagon after Ginger passed, but I just reread my journal not long ago. I found my attitude needed some adjustment again. Life is hard, no doubt about it. We all have days (or weeks or years) when we just want to cry “Uncle!” But we have to keep going. I believe that if we find a way to be thankful for each day we will find ourselves in a much better mindset to handle the trials that will come our way. Whatever you’re facing, I encourage you to find a way to be thankful and watch and see the changes that start happening! Gratitude is a choice…

Jodie A. Perry, IOM, CCEO-AP has served as President of the Richland Area Chamber of Commerce in Mansfield, Ohio since July, 2014. In that role she is responsible for overseeing the operations of the 1,000 member organization which works to promote the business and economic vitality of the Richland County area.

In 2008 she graduated from the US Chamber of Commerce Institute for Organizational Management earning the IOM designation. Jodie is active in the community and currently serves on several area Boards of Directors. She is the Vice Chair of the Board of Regents for the Midwest Institute for Organizational Management and served as the Treasurer for the Chamber Alliance of New York State previously. The importance of business was instilled at a young age as she grew up in a family of entrepreneurs in Rochester, NY.