Creating Your Tribe – Expose Your Inner Self 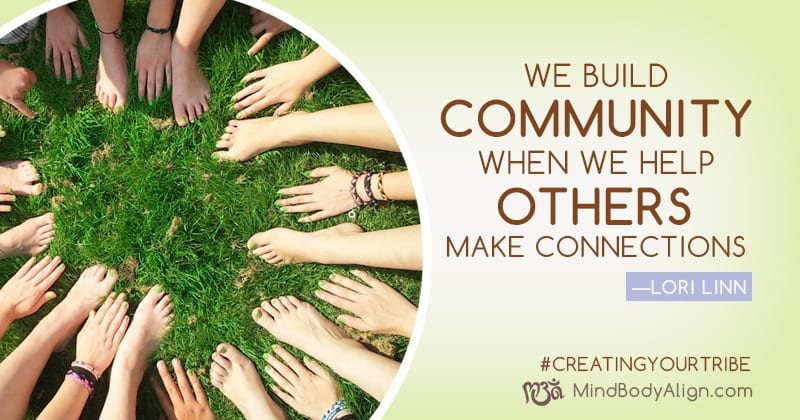 I remember walking into gym class, returning to the school that I had attended through 4th grade. Over the summer I had moved and I started 5th grade in another school in the district. But a custody change between my parents led me back to the school I had known all my life. After my dad enrolled me, the principal told me I could go join my class in the gym.

I walked into the gymnasium just as they were beginning to pick teams for kickball when my friend Robin spotted me and yelled “Lori’s back! Suddenly, I was surrounded by a mob of pre-teen girls screaming at the top of their lungs as they hugged me and welcomed me home. The reunion was cut short by the shrill of the gym coach’s whistle and his stern instructions to get lined up. He announced, that in honor of my return, I would be the captain of team A, and I proudly took my place in front of all my classmates ready to pick my team. (This was an honor generally reserved for the most athletic persons in the class, a drastic contrast to my being the last one standing; finally going to a team by default, not because I was picked.)

Looking back, I think that was the moment that defined the friendships I would take with me through Jr. High. I remember how wonderful it felt to be back in the comfortable surroundings of people I knew. How, for that one moment, I felt like a rock star.  How quickly the moment changed when suddenly I was faced with the dilemma of: do I choose a team to win, or do I choose a team of my friends, who, (after all these years I’m sure I can say this without offending), suck at physical fitness.

The gym coach, beginning to lose patience, yelled at me to make my pick, and I was stuck. I couldn’t decide if I wanted to pick to win or pick my friends. I could look at the line, and see that the true athletes were hoping that I wouldn’t choose them, and my friends – my true blue, ride or die, friends – were anxiously waving at me to pick them. Of course, I did.  I picked Robin, Teresa, Jenny, and Kelly. I don’t know who else I chose, but I know that these classmates were the right choice because today, 45 years later, Robin, Teresa, Jenny, and Kelly are still my friends.

Moving forward 40 years I have surrounded myself with many Robin’s, Teresa’s, Jenny’s, and Kelly’s. Some have been in my circle for a long time, others have already broken away and a beautiful few are entering. I pride myself on the tribe that I am part of.  For many, being part of a tribe is necessary, for me, it’s an honor and a blessing.

Being part of a tribe, however, is not always easy.  Maintaining deep relationships is more than clicking on a little icon to let someone know you like their photo or meme, sending a group text to announce your birthday party location, or a Snapchat to share what you’re having for dinner. Social media is a great venue to keep in touch with casual friends, however, I wouldn’t invite all my electronic friends to a pow-wow in my blanket teepee. In fact, there would be very few.  And I would choose them today, in much the same way I picked my kickball team all those years ago.

As the years have evolved, I’ve gotten to know myself better, and love myself for who I am. While this step is an entire blog in itself, it’s probably the most important step in building an amazing tribe. This doesn’t mean that when I was 10, I knew myself in depth, but I did know that I had nothing in common with the kids who could pass the annual physical fitness test on the first try every year. I was much better suited to the kids who would much rather tie-dye scarves in art class or belt out the chorus of every song on Casey Kasem’s top 40 countdowns.

Get to know your potential tribe

I belong to a networking group, and for two years, I met these people every Tuesday for breakfast. Every week, I sat at a different table until I found myself gravitating to one table more often than others. There was something about the people who regularly sat at this table. Just recently, one of the persons at the table told me about his excitement that Jesus Christ Superstar was going to be on, and he couldn’t wait to watch it. When I told him that my son was going to be “Roman Soldier #1”,  he was even more excited. This was all the confirmation I needed that I was at the right table. I could lead this table into any kickball game, and know that we would have a great time! This doesn’t mean that the other people in the group are not tribe worthy, it just means that this table is MY tribe.

Jenny was my first friend in life.  I met her in kindergarten when I had transferred from another school.  She was in the office and showed me how to get to our classroom. Once we got there she introduced me to Kelly and other girls who were friends of hers. Quickly we all became friends.  Today’s connections may not be as organic or simple, but we build community when we help others make connections.  Dig in. Get personal. Find like-minded people and skip the small talk. Expose your inner self.

When I think about how the best members of my tribe came about, I realize that everyone is there because of a connection. It’s been a wonderful discovery to grow together, and even if Kindergarten is the biggest connection we have, Jenny, Robin, Teresa, Kelly and I, are a tribe to be reckoned as together, we continue to expand our tribe, and yet we know that there is a grand peace pipe waiting in the Chief’s teepee when we all get together again.

A few things about me. A mother of two beautifully successful children and 3 grandchildren. Member of Slow Roll Mansfield planning team. I enjoy the Performing Arts, cycling, cooking and sports. I am a caretaker of my space in the universe and, like my grandma who named me, loving people is the reason I am here.