Embracing the new you 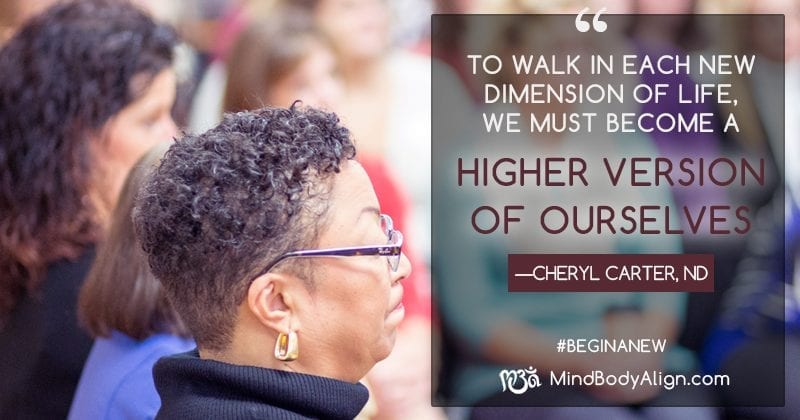 2018 is going to be an AMAZING YEAR! “8” is the number of new beginnings and there’s no better time to envision a fresh start than at the start of a new year. You might say that New Year’s Day represents a big Monday on steroids. Everyone knows that Monday is “the” day for starting new projects and that January 1st is “the” day to start becoming the “new” you. Perhaps it isn’t a “new” you that’s needed, but rather the unveiling of an “evolved” you.

Until your soul is quieted, it’s actually quite difficult to drill deeply enough to identify what’s holding the “real” you hostage. Every one of us is full of the genius necessary to live out our purpose on the earth and do so quite gloriously. Getting there is the issue. It’s a process of stepping into higher and higher dimensions of ourselves. We’re not ready day one, so our lives have a way of helping us if we’re paying attention. I must not have been paying attention.

It was a cold day in January

January 19, 2017, to be exact. One moment I was in motion and the next I was not. It was a hard and brutal stop. When the squad arrived, I was still “thinking” in slow motion. “What on earth just happened? How bad is it? I’m afraid to move. I hope the others are alright. I’ve got to call my office. This is bad. This is really, really bad.” Sirens fade in and out. Surrounded by comforting voices, I just couldn’t catch up with reality.

After doing all they could, the hospital released me into my parent’s care. “I don’t have time for this. Just give me a few days to rest, and I’ll be good as new.” After being bed-ridden for the 1st three weeks, I realized “this” is happening. By the end of the 2nd, I had to surrender to “it” or lose my mind. By the end of the 3rd three weeks, I found a way to embrace it. I had been given a gift; one that came swiftly, violently, and unapologetically. Although it took some time for me to embrace it, the “stillness” was exactly what I needed. I had several months of uninterrupted time to do some work, some real work.

I had increase on my mind

When our souls are quiet, we can reflect, reconsider and re-evaluate our lives. I thought I was “on track”, whatever that means. I thought I was doing okay. But in the stillness, I began to see truths that had eluded me. I began to see what was driving me each day. I connected with the knots in my stomach and the fatigue in my bones. I leaned into the weariness I’d been avoiding. I decided to face the truth behind these manifestations of misalignment. We cannot expect to grow, to expand, or to increase when we’re disconnected from ourselves? It was clearly time for a “newer” me to emerge from the rubble.

When I considered all that I wanted to accomplish, I knew I’d never make it if something didn’t change. I decided to drill down beneath every thought, attitude, and behavior that clearly wasn’t serving me. I focused on anything based in fear, doubt, or unbelief. I probed beneath anger and unforgiveness. I examined deeply held beliefs about life, love, and living in order to pinpoint why I wasn’t manifesting the life I really wanted. I challenged myself to adopt new ways of thinking. I looked at everything I was involved in and asked myself “how does this align with my values, my purpose, and my passions?”

By the time I returned to Mansfield, I knew it wouldn’t be business as usual for me ever again. I had to maintain my new mind-body connection. I learned to honor the limits of my humanity. I eliminated things that I secretly dreaded. I decide to let go of what I thought “had” to be and opened myself up to what “was.” I decided to live a life of infinite possibilities; to approach each day with gratitude for what would unfold, believing that I had all that I needed to live each day fully.

To walk in each new dimension of life, we must become a higher version of ourselves. Who we are is sufficient for today. Who we are becoming is necessary for our tomorrows. Transformation flows from the inside out. When you embrace a new “view” of you, you unleash the power to become a “new” you or, should I say “unveil” the next higher version of yourself. She’s already in you. Isn’t it about time for “her” to show up?

A dynamic speaker and community leader, Cheryl Carter is known for making impact. A former IT Sales Account Executive, Ms. Carter has spent the last twenty-five years speaking nationally and internationally to audiences on leadership, human potential and personal empowerment. Through the power of the spoken word, she inspires audiences to embrace higher dimensions of thought and action; leading to individual and organizational transformation.